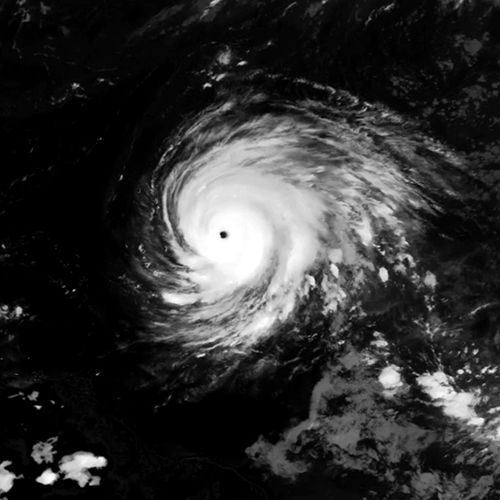 Video on 3-minute loop with fans and sound.

This is a three-minute video creation in which the artist delves into human needs. In it he attempts in his own words to reflect “how society lives deceived by the world order with its interests or by the misfortunes of natural catastrophes.” He also wants to argue for art to reduce the coefficient of need to “practically zero”. “A life without fear of loss or with the means to include it in the fable of our existence may be the most powerful weapon to combat disaster.”

“It is not midnight, but the sky darkens as if it were, with that even blanket of clouds preceding the arrival of a hurricane. It is a phenomenon that articulates our logic of need and the order of our priorities.

A life without fear of loss or with the means to include it in the fable of our existence may be the most powerful weapon to combat disaster.”

The video creation is the image of a hurricane seen from space and it is observed with a powerful sound that can even be heard outside the hall and in which Juan Manuel Artero also collaborated. Ampudia explains: “My idea was to put the audience in a situation of risk, because that makes people think differently. It seemed to me that a hurricane represents one of the extreme situations in which people lose control.”

The metaphor with the current situation is obvious, at a time of crisis that is also reflected in art. “I am convinced that, if culture is not backed by money, it will end up somewhere else and that will be detrimental to a society that little by little is being left without ideas, because that is what culture is for: to contribute ideas.”

With this work, he has taken part in the Panama Art Biennial.