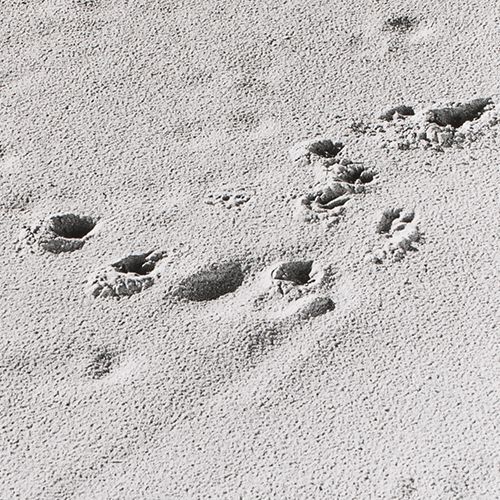 Junco observes and photographs birdlife with landscapes as backdrops. He photographs everything he sees along the way and creates metaphors and comments on topics that fascinate or concern him. Halfway between science and art, he takes us, on this journey through the boggy marshlands of Cádiz. Carried out between the Autumn of 2016 and Winter 2017, he chose the moment in which the tide goes out and the area looks like an island surrounded by sludge. Many of his projects are the result of background reading. In this case, the book entitled Wild Andalusia, published in 1967. Thus, he brings together books from the seventies and eighties, featuring hardly any photographs, with science and conceptual art.

The artist compiles the perceptions he has on winter, the sea and life. These photographs transport us towards his private vision of the world, understood through twelve brief considerations that perfectly explain his work “Invierno, Mar y Fango”.

“Twelve brief considerations on INVIERNO, MAR Y FANGO or on matters that fascinate or concern me:

One. This work is a remake. It is based on the mock-up of a book edited in 1967, entitled WILD ANDALUSIA in which the photographs by Charles-A Vaucher have been replaced by those I have taken in the last five months.

Two. Said book, along with another by the same author, BIRDS IN FLIGHT, which were in my home when I was young and I remember having leafed through them in awe, hundreds of times, BIRDS IN FLIGHT was edited in 1963.

Three. In 1963, Ed Ruscha created TWENTY SIX GASOLINE STATION. I feel the same fascination for this work as for the ones I have mentioned above. This detail is of pivotal importance, as the result of both fascinations gives rise to the block entitled CONCEPTUAL ANDALUSIA, whose fifth chapter is INVIERNO, MAR Y FANGO.

Four. Really, I only want to work on matters that fascinate or concern me.

Five. INVIERNO, MAR Y FANGO is a project that deals with landscape (a subject that fascinates me).

Six. INVIERNO, MAR Y FANGO is a project that deals with birdlife (a subject that fascinates me).

Seven. INVIERNO, MAR Y FANGOE is a project that deals with autobiography and memory (a subject that concerns me).

Eight. Just before beginning INVIERNO, MAR Y FANGO I moved, for professional reasons, to the city of Cádiz. All the geographical accidents that surround my everyday life interest me, as the landscapes, just like the loves that are not chosen, appear and are loved.

Nine. After a tremendous loss, my brother Eduardo, in the role of big brother, mentioned that Neil Young, at a particularly low point, made three albums, two of which ON THE BEACH and TONIGHT ‘S THE NIGHT are considered masterpieces.

Ten. During a particularly testing time, I decided, for the first time, to include my emotions in my work as a frame of reference.

Eleven. The combination of emotions (a subject that concerns me) and landscapes (subjects that fascinate me) have given rise to personal geographical fortune that can be used as both a metaphor, as well as therapy.

Twelve. Now what truly interests me is a drift in the landscape. Observing birdlife, photographing both landscapes, as well as fowl, along with everything I find along the way, and creating metaphors and comments on subjects that fascinate or concern me.