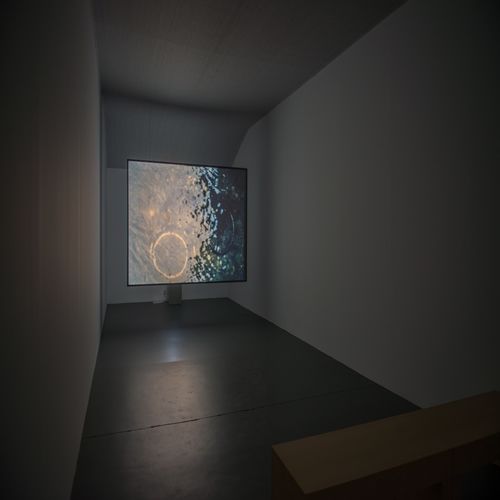 Before being a film-maker, Steve McQueen is above all an artist and a video-artist. His work delves into a contemplative and static aesthetic, delaying the temporary nature of tight and fascinating images. A visual domain and a radical narrative that we could visualise in the stunning Hunger, McQueen's first feature film. In the same way as his video-art creations, McQueen's proposal is presented simply as a visual reflection where the sensations and experiences are more important than any intellectual analysis or explanation.

His work uses narrative and content as an element that is secondary to the physical or psychological fact of the moving image itself.

The overhead projection, though it does not show moving images, evokes a flowing continuity due to the off-screen attenuation of five 35 mm slides. We see a flat body of water, the Limmat in Zurich, and discover a bicycle that has come to a standstill at the bottom of the river. The images slowly overlap each other, making the bicycle seem to slightly change position, as each image becomes a reverberating image of the next, until finally it fades away. The intensity of the light varies from one slide to the next, creating a play of shadows and lights, the current and the stagnation, the reality and the illusion.