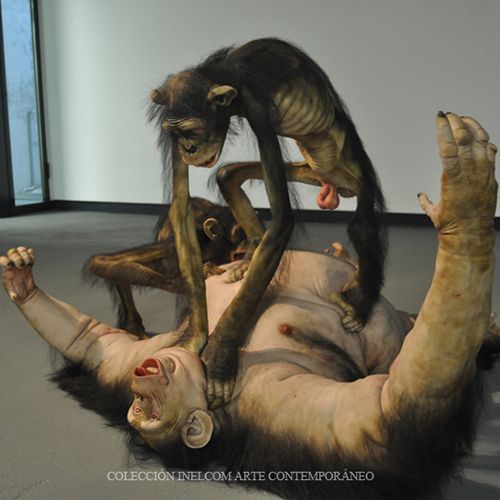 He reflects an altered and distorted vision of reality with an ironic tone that is on the verge of parody. Human violence is an extreme form of communication between human beings when we see our fellow men as rivals. The representation of the ape as a counterpart to man is recurring in Matelli's work, in an attempt to represent our current society looking towards the past. He reflects the relationship between social individuals, through two beings that are so close yet so distant, so similar yet so different: the ape and the man, ironic characters that lead to ridicule, simulating their reality in a society that sometimes becomes a jungle.

It is an intergenerational confrontation, the past and the future, that fight to find their place in society and do so with aggression and hate reflected in their gestures. The old enemy, the past that is creating an obstacle, must be eliminated; this is a fight for power in the group and is a moment in which apes and men coincide.

It is a brutal social and political denunciation by Matelli, who is critical of and concerned by violence in current society. The difficult coexistence between human beings has not evolved much since its origin. Man appears as the worst enemy of man, capable of using violence against his own and of adopting behaviours that our current evolved society believes to exclusively pertain to animals. His sculptures are metaphors for social unease and the fight for survival.

The piece Old Enemy, New Victim from the INELCOM Contemporary Art collection formed part of the exhibition held in the ARoS Kunstmuseum in Aarhus, Denmark (2012) and in the Kunstmuseum in Bergen, Norway (2013) titled “A Human Echo”.