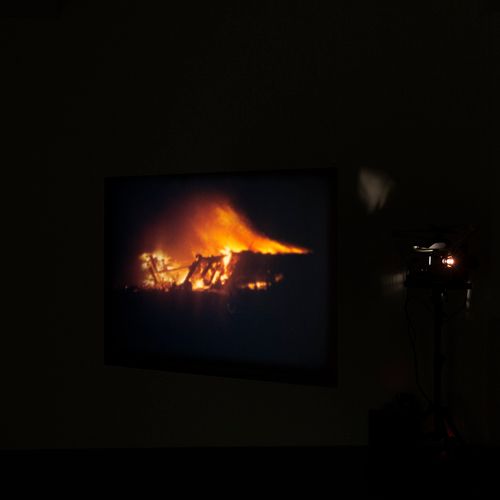 16 mm film in black and white and colour. Silent.

This film is the result of a broad investigation carried out by the artist since 2013 in the area of Sulcis, a piece of land in the south-east of Sardinia. The artist spent several months working in the zone of a mining operation between Carbonia and Nuraxi Figus, reaching the islands of Sant'Antioco and the surrounding lagoon. His interest for mining led him to work in the last coal mine still in use, Carbosulcis, which is now closed and undergoing a reconversion process. The economy of the zone is very much related to mining, but the poor performance of local coal, together with the growth in renewable energy investments, condemned the mines to a final closure plan approved by the European Commission in 2014.

The artist accompanied the miners in the process of extracting coal on various occasions. Also, during the night of 4 December 2014, the Day of Santa Bárbara, he accompanied them on a night walk from Carbosulcis to the island of Sant’Antioco. The group walked through the darkness of night with only the light of their helmets to light the way. When they reached Punta Tretti to the south of Matzaccara, they embarked together on the fishing boats that took them to the shore of Sant’Antioco, an island connected by a short artificial isthmus.

From there they walked to the Stagno di Cirdu fish farm. There, at the same time a wooden boat was being burned. The fire lit up the night and the boat was slowly consumed, leaving a mound of charcoal.

The action narrated in the film begins at dusk and ends at sunrise. The film itself is dark, lyrical. It is a vision that condenses the structural changes in colour, where the landscape flows in the background; you don’t even see it; it shimmers. The night of 4 December 2014 was as black as coal, cloaked in a geological silence. The miners come out of the darkness of the earth and rise to the surface. The torches that light the way move on the road of the work teams, marking the progress of the march. Their pace is in unison, measured by tongues of fire from a boat in flames on the beach of the Stagno di Cirdu fish farm. Engulfed in the flames, the peregrines’ ritual burns out. The fire walks with them.

This place was not unknown to Andreotta Calò, since he travelled there several times, taking various souvenirs home. In this geographic zone, the remains of a languishing economy still emerge; an economy that still persists. The coal is extracted from the belly of the earth, in darkness, where the humidity amplifies the smell of the mineral and the hours pass by inexorably.