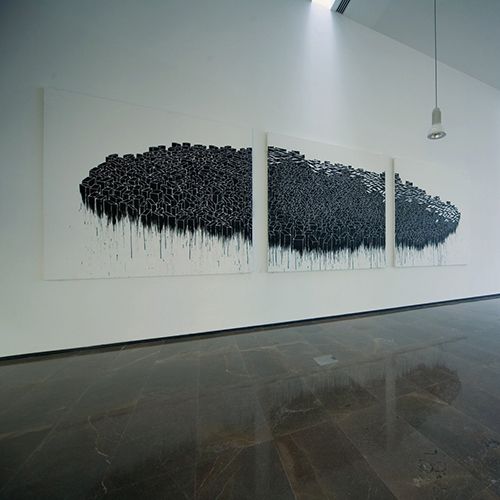 Untitled (2006-2007) was preceded by a series of monumental murals drawn directly on the wall in pencil and acrylic paint. This is the first time Kader Attia captures this idea on canvas. This piece represents an image of an impersonal city composed of a series of mixed-up black buildings, whose contours draw a labyrinth of desolate streets: seen from above, it resembles a dark slum, an inhospitable town. The cumulative effect of these urban drawings resonates with the modernist spirit which Le Corbusier infused in humanist architecture – the same utopian spirit that offered housing solutions for waves of urban residents. When looking at Kader Attia’s work, it is impossible not to wonder what remains of this utopian idea and how it has deteriorated into the appalling conditions of existence endured by immigrants on the outskirts of large European cities in places that resemble hopeless urban infernos.

Cultural and genetic heritage are present in the work of Kader Attia. The artist explores the world of emigration and the universal desire of each individual to belong.