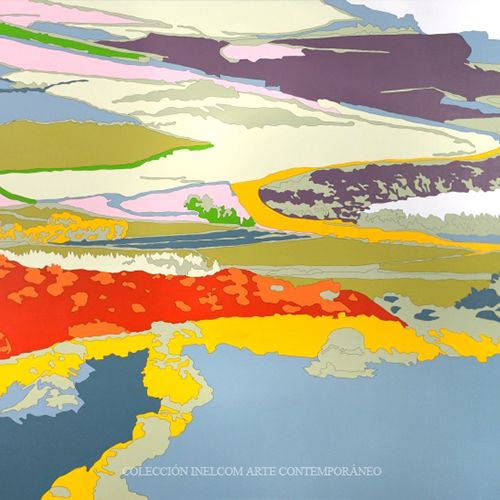 This pertains to a series of colourful landscapes based on photographs taken over several months on the island of Mykonos. The final result is that the abstract lines that a prosaic and typical holiday photograph can contain, when enlarged to a large format painting, adopt a flat and artificial nature.

The views of mountains, roads and towns adopt a flat appearance, as if on a billboard, thus involving the spectator in the understanding of the space.

The riot of blue, purple, red, orange and pink colours make the natural features, so well known by the spectator, appear strange and unnatural, briefly recalling the Japanese woodcuttings that left impressionist painters from the 19th century so engrossed.

Lisa Ruyter manages to silence and paralyse an almost cinematographic space in a strange framework of inactivity.

The title is inspired by a Terence Davis film shot in 1992, starring Marjorie Yates, Leigh McCormack and Anthony Watson.