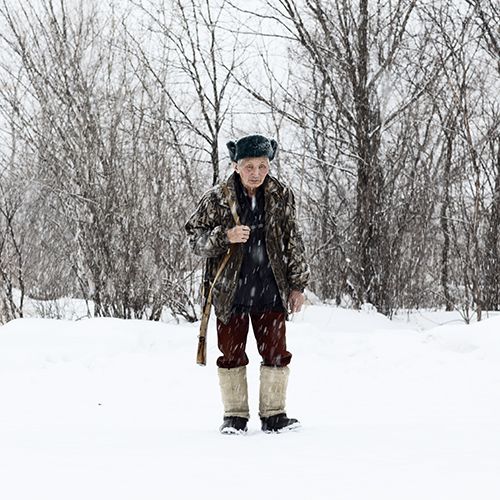 Dersú Uzala –the Hunter- takes its title from the autobiographical work written in 1923 by Vladimir Arséniev, in which he narrates his journeys through Eastern Russia, his experience in the taiga and how he mapped a large part of this territory. The book is considered a classic of twentieth century literature. The guide who leads him through these territories is called Dersú Uzala, a nomad hunter from the region. The writer appreciates the way in which the latter treats nature, on equal terms.

In 1975 Akira Kurosawa, thanks to the Russian production firm Mosfilm, directed the movie with the same name that won the Oscar for the best foreign language film. The project was filmed on the south-eastern border of Russia, specifically in the region named Primorje on the border with China, North Korea and the Japanese Sea. The town of Udegei, an archaic and millennial hunting community, have been the inhabitants of the Boreal Jungle for hundreds of years, overcoming life in a hostile environment. Owing to their contacts with nature, their beliefs are linked with the supernatural. The Siberian tiger is what inspires most fear and respect in them.

In 1997 John Vaillant tells in his story “The Tiger” the death of a hunter mauled by a tiger. The story, a true event, had as its star a furtive hunter named Markov who, motivated by greed and necessity, thought that he could overcome the risk of attacking the tiger known by the people as Amba and who for the Udegei people personified the spirit of the forest. He missed his shot and became the tiger’s prey who searched the latter for days until the beast located his isolated hunting cabin and awaited the return of its victim.

These two books that captivated Álvaro Laiz were the driving force behind the audio-visual and photographic project that featured the collaboration with the Cerezales Antonino y Cinia Foundation, located in the town of Cerezales del Condado, in Leon.

Laiz spent four months in 2014 and 2015 living with Udegei hunters to get a closer handle on their frosty environment and lifestyle. He explored through photography, video and audio, the relationship these hunters maintained with the tiger and the events that have driven both to the limits of extinction.

The pro-animal and shaman beliefs commonplace in this town is the starting point for the analysis and documentation of impact that nature bestows upon the hunting community, and the Udegei culture, who have to learn to follow the trail of these animals to be able to hunt and survive.

This work has been featured in a limited-edition book from the publishing house RM, presented in June 2017.