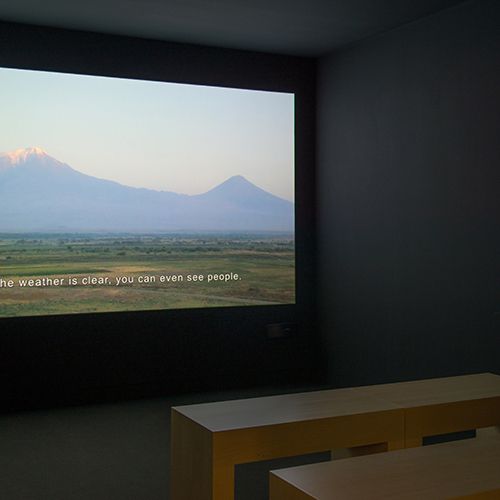 Mount Ararat, the most important national symbol of Armenia, is located in a place where four countries converge: Turkey, Iran, Azerbaijan and Armenia. It is full of mythological significance and is supposedly where Noah's Ark was stranded. Since the Armenian genocide of 1915, Ararat is no longer part of Greater Armenia. Today Mount Ararat is located just behind the closed border with Turkey, dominating the Armenian landscape. Now the Armenians can only look at it.

In Relocation, the sun rises over the monumental twin mountains of Ararat. From a black image, the landscape slowly emerges, revealing human life. The landscape we see is viewed from Armenia, at the point closest to the Turkish border.

Left and right are inverted, meaning that the Armenians see an impossible view of the western part of the mountain. This brings to mind a prior time in history when Armenia was all one country.

The text that appears on screen is a dialogue between both mountains and the rest. In fact, this text is based on the testimony of the two sides of the mountain and can be interpreted as a dialogue between two nations and between two historical, political, biblical and utopian connotations. It goes back to the early 20th century and refers to a turbulent period and the tense relations between Turkey and Armenia.